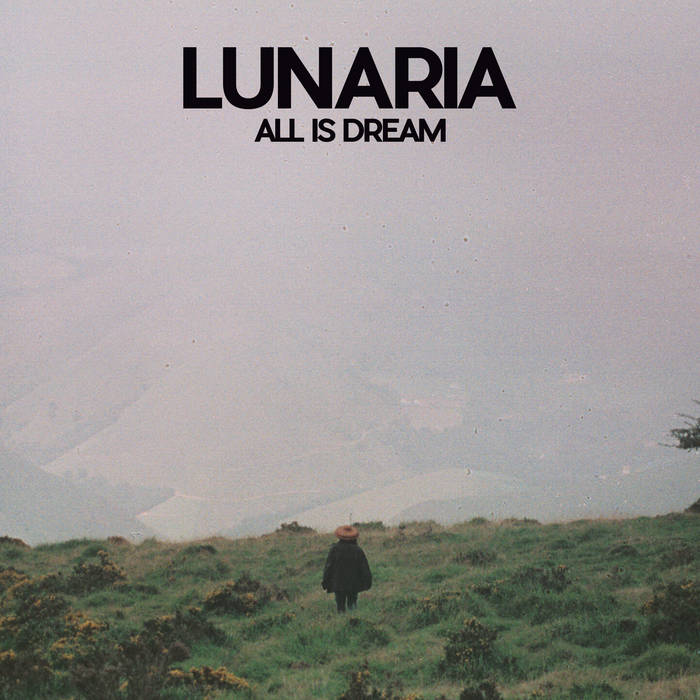 Bradley Sur Will be appreciated for years to come and later discovered to be a gem of it's time.

David James The music here is flush with vast, yawning chasms of melancholy synth tones and little, delicate patches of nature, of tangible elements that feel hand crafted and carefully placed. These songs ache with sensuality, humming with an affection for the experience of feeling a moment through all of one’s senses... Favorite track: Butterfly Dreaming.

Aloha Got Soul Sounds Of The Dawn's best release to date, a true modern-day gem. Favorite track: All Is Dream.

I’m disgracefully behind with my record and cassette reviews – it’s been a strange, taxing, and hectic period. This should have been written over a month ago. Lunaria’s All Is Dream is the second entry in Sounds of the Dawn‘s already incredible catalog as a label. I’ve expressed my affection for them in the past – particularity in my review of their first cassette – Pacific Image by Hybrid Palms. I was also kindly asked to contribute a mix to their efforts a while back. I considered it a great honor. Sounds of the Dawn is one of the best archives of New Age music on the web. Since stumbling across the blog, it has remained a constant resource for discovery, and a means to access recordings that have thus far eluded my reach. I can’t sing their praises enough. It’s also striking that, rather than becoming the label you might expect them to – reissuing sought after and obscure gems, they have cast their gaze on contemporary realizations of this music, creating a fascinating dichotomy between the blog and label / past and present. Though I selfishly hope they might bring back some of the rarer items in my want list, I also think what they are doing is remarkable, well considered, and a breath of fresh air in today’s reissue-centric market – particularly when drawn on the passion and depth of knowledge that underscores their larger project.

Lunaria is the moniker of Daniel Guillen. As far as I can tell, this is his first release. All Is Dream finds him joining the pool of contemporary New Age practitioners at the top of the field. This music has a complicated history. It developed during the late 60’s and flourished through the mid 80’s – existing as an extension of, and soundtrack to, the psychedelic generation’s shift from political action towards the pursuit of inward spiritual journeys. By outsiders, it was largely viewed as self-indulgent and cheesy. A sonic metaphor for the demise of a project begun with collective idealism, only to give way to the dark cloud of neo-liberalism during the 80’s. By the time I encountered it during the early 90’s, New Age had come to be regarded with disdain – the only thing worse than Disco, and to be avoided like the plague.

Time and distance offer invaluable perspective. New Age has been radically reappraised in recent years, opening a swell of new fans and practitioners – seemingly freed from its perceived cliches and associations. It’s a difficult music to address. A lot of it was self-indulgent, and of dubious quality. Most of it explored fairly new sonic territories. There’s not much to compare it to, and there’s a lot of it to get through. It takes a great deal of work to separate the bad from the good. All Is Dream presents another side of that challenge – a different vision of the past. It offers contention to what we think we know, and the character of our critique. Much of the recent reappraisal has side stepped many of the movement’s more noted names – Steven Halpern, Ray Lynch, Deuter, Paul Winter, etc, choosing to focus on artists who offer an alternate vision of New Age, particularity those with more tangible connections to the avant-garde – Ariel Kalma, Iasos, JD Emmanuel, Laraaji, etc. In other words, there’s been a gentle cleansing. Though not without its reasoning or merits, it does risk accuracy, objectivity, and loss. Recent realizations often draw heavily on this new vision. It is rare to hear complete indulgence in the ecstatic washes of synthesizer, texture, and ambience which defined so much of its sound. This is starting to change. It’s fascinating – not only for the results, but for the risk it traverses. It’s a slippery slope – hard to do well, or with artistry. All Is Dream is one such case.

It took a while for me to understand what I was listening to – for the album’s sounds to grow on me, and for me to locate its challenges. What it is, and where it sits, is not immediately apparent. All Is Dream is beautiful, and that’s part of what makes it so hard. It’s an album built from what many would feel to be New Age’s most dangerous, or self-indulgent, sonic characteristics – almost saccharine harmonic relationships. Placed into the world as we find it, and guided by Guillen, they becomes a great deal more. Context is one of many silent hands. The cassette embraces a world of quite meditation, enveloping the listener in a dreamy world of synthesizers, ambience, texture, and warmth. Heard blind, you’d likely think that if had been made sometime in the late 70’s or early 80’s – but this isn’t a piece of nostalgia. It’s an intervention, forcing us to question what we understand about this territory of sound, where it once sat against the larger body of culture, and how it exists in the world today. This isn’t just beautiful music. It offers a path, and leaves us with questions.

If New Age was the sound of a generation turning inward, viewed by many as a self-indulgent choice, it’s worth asking why it was taken. The 1970’s was a period defined by war, disillusionment, media frenzy, cultural saturation, and political corruption. The optimistic dreams of the recent past were dropping like flies, and with them, a belief in empowerment and self-control. Described as such, that world doesn’t feel much different than our own. Is the impulse to turn inward that hard to understand? Is it self-indulgent, or logical? This is part of what All Is Dream seems to propose – to take a moment, and let it all drift away. To escape a complex world of fear, disillusionment, over saturation, and corruption – to find some beauty within it, bask, and understand the history of these sounds on different terms.

Against all the static and distraction, and the easy temptation to respond with angst, All Is Dream presents a rare moment which doesn’t call attention to itself, and offers more than it claims. It’s self-consciousness and artistry, with the questions it poses, keeps it from succumbing to the risks it takes – making it an unassuming triumph, challenging our understanding of the past, while focusing on the future. Through optimism, it draws us toward our darker truths. You can listen to it below, and pick it up directly from Sounds of the Dawn. I highly recommend that you do.
blogthehum.wordpress.com/2016/09/12/on-lunarias-all-is-dream-the-second-release-from-sounds-of-the-dawn/

When creative forces converge and music is made, ensuing beauty or dread moves through the world of listeners. How these sounds grip individuals depends on a unstable array of timing, emotions, accessibility, etc. Lunaria has focused this sonic beam, cutting through would be factors and allowing an audience freedom from having to decide. All Is Dream is straight forward beauty. The only requirement would be the time to listen to it.

Daniel Guillen is the energy making Lunaria glow. Eight tracks, close to forty minutes in length, provide a vast aural framework for the consciousness to explore. All Is Dream has strong ties to the seventies new age surge of the past. If you have ever listened to Eno's 1978 release Music for Airports, All Is Dream would fit so well with the last track titled 2/2. There is such a fine line when creating these sounds then and now. How to achieve tones that are relevant and full of feelings without crossing into the world of spa or massage music. I guess it starts with Daniel and his ability to compose the sounds his mind creates for the purpose of just that. There is no glory or fortune in releasing cassettes, most people think you are way out there when you say tapes are still a viable medium. All Is Dream is more of a vintage photograph of sound, snapped from an artist at some unknown point in time. When people listen to Lunaria, their wonder will sparkle with thoughts augmented by the music. Cognition will radiate both inward and outward and moments of serenity will appear through the haze.

This cassette is out on the label Sounds of Dawn, from Michigan. A resource of excellent sounds both from the releases they have curated, their NTS Radio, and the sweet cassette blog exploring forgotten tapes of the past. The Lunaria release is vividly recorded on a clear cassette body, packaged in a clear cassette case wrapped in an colorful outer sleeve then protected by a polypropylene bag. Daniel's music was also mastered be Sean Conrad. Pretty much a muscle car of modern ambient music. Available from HERE. And while you are exploring Lunaria, take a moment and check out the Hybrid Palms cassette also on Sounds of Dawn. I purchased a copy from Tomentosa (out of stock there). Another outstanding release with physical copies still available.
lostseasound.blogspot.com/2016/10/lunaria-all-is-dream.html

Second tape release at Sounds of The Dawn brings to the world a new masterpiece in the new age genre - an it's only a debut album, recorded by Daniel - a member of our blog's team. Listening to this tape is an immersion into the state of heightened sensitivity, when everything becomes brighter and clearer. It may sound as a cliche when it comes to ambient new age music, but I'm too assured in the fact that actually any music can do that if it has sincerity. There are nothing supernatural about the impact which music can do on our minds and we don't need scientific proofs for that - just an open-minded listening, which leaves analysis and criticism beyond the perception. Blissful tones of this music is a soft contradiction to the modern pop-music with its aggressive production. One may call it escapism, but then one should ask himself - where are you escaping when listening to radio hits? What is real? Which reality is true and everlasting, and which is just temporary construct of humanity's greed? Nature is all around us, but we mostly ignore it, building our own realities, first concrete and metal, then virtual... But when I go with this though further, while bathing in the crystal clear melodies and chimes of Lunaria, I realise that answer is already here - literally. On the tape cover. It says "all is dream" and duality of the meaning of the word "dream" makes the answer even clearer. There is no escapism. Global civilization, the Humankind, even Cyberspace - everything is Nature, part of our planet's evolutionary process. And this whole process is just a part of universal dream. Who dreams it? We all do, and by doing that we can make all kinds of things... And we do them, many different things, not always pleasant - saying "what the difference?". But when someone makes music like this, when someone listens to it and it makes one's dream a bit brighter and lucid - I can be only happy. And it makes a difference.
calmintrees.blogspot.com/2016/09/lunaria-tvvinpinezm4all.html

Sounds Of The Dawn

Bandcamp Daily  your guide to the world of Bandcamp